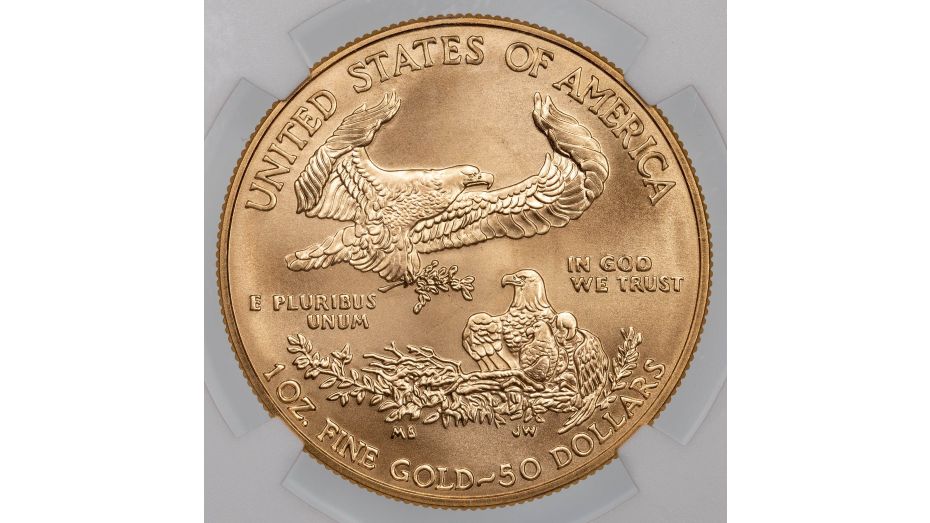 The American Gold Eagle is a beloved coin that brought gold back to the American people after an over 50 year hiatus. When Ronald Reagan signed the Gold Bullion Act in 1985, he authorized the creation of this stunning coin from newly mined American gold. The obverse showcases the most beautiful design on American coinage, the Saint-Gaudens Gold Double Eagle. As for the reverse, a design was chosen from Miley Busiek, a self-taught artist who worked hard for her recogniton. But Busiek, now known as Miley Tucker-Frost, did not originally envision her art on an American coin. So how did it end up there?

Upon watching Ronald Reagan’s speech accepting the Republican Presidential Nomination, what struck Miley Tucker-Frost was the theme: Together, A New Beginning. While on vacation in with her family in Wyoming she observed a nest of eagles on a rocky cliff above the Platt River. This inspired her to showcase family values through the symbol of America, the bald eagle. “Our national symbol, the American bald eagle, had only been depicted as a single eagle, and I liked the idea of thinking of America as a caring family,” Tucker-Frost said. “Therefore, I put together a sketch showing not just one eagle, but a whole family.”

The Republican National Committee saw her sketches and commissioned her to create a sculpture based on this theme as the official commemorative for Reagan’s first inauguration. The miniature sculptures were produced as gifts for guests of Ronald Reagan’s first inauguration. In addition, 52 mini-sculptures were created as gifts for the former US hostages whose return home from Iran, after 444 days of captivity, coincided with Reagan’s inauguration. During the 8 years of his presidency, Reagan proudly displayed a bronze casting of Miley Tucker-Frost’s sculpture on his desk.

Shortly after this achievement, Tucker-Frost was reading about the possibility of Congress authorizing a new gold coin. She thought that her Family of Eagles design, which she called “Together: A New Beginning” would be a perfect fit. After contacting the US Treasury, she was advised that only Congress could approve the design, so she began a promotional campaign.

Using various connections she had forged, Miley Tucker-Frost solicited letters of support from religious and civic leaders. She even managed to gain the support of rival coaches Tom Landry of the Dallas Cowboys and Joe Gibbs of the Washington Redskins. During the whole six-year process, her oldest son’s classmates showed their support with letters to Congress and she gave them personal updates which showcased how legislation works.

In 1985, President Reagan imposed a ban on the African Krugerrand which spurred Congress into authorizing a new American gold coin to replace it in commerce. Very quickly, the Senate, the House, and then President Reagan signed off on the new gold coin. The legislation stipulated that the reverse design must show a male eagle “carrying an olive branch and flying above a nest containing a female eagle and hatchlings.” While Tucker-Frost is not explicitly named in the legislation, it was clear that her campaign had worked and she was chosen as the designer.

In 1986, at a special ceremony at the West Point Mint, Miley as well as her two sons were privileged to participate in the first strikes of the American Gold Eagle. This was the culmination of six years of hard work that started with an idea inspired by the very president that authorized her design to be struck on the first new American gold coin in over 50 years.

The Family of Eagles design based on the “Together, A New Beginning” statue was used as the reverse of the American Gold Eagle for 35 years until it was replaced in 2021. Through persistence and belief in American values, Miley Tucker-Frost was able to follow her dreams and share her vision for a better America. Rare Collectibles TV offers a variety of American Gold Eagles of both Type 1 and Type 2 at the highest grades possible.