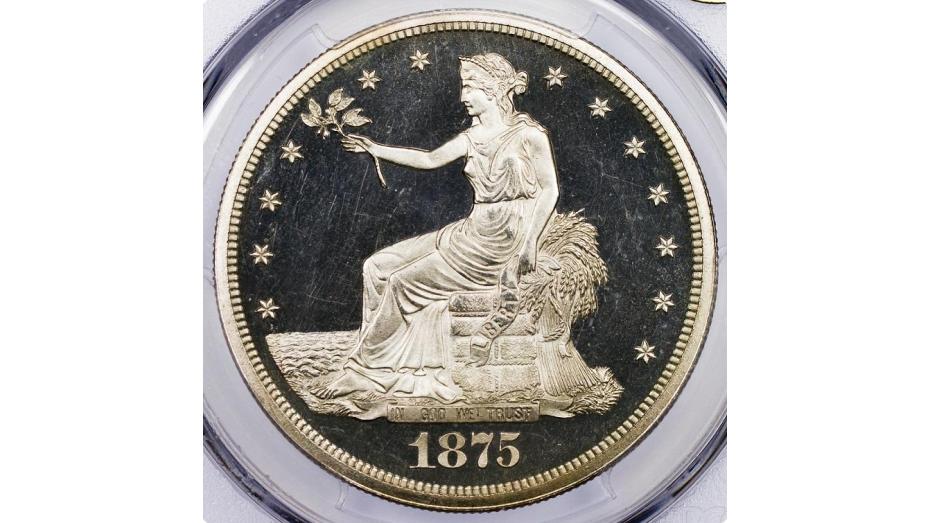 Silver Union: The History of the Trade Dollar

When it comes to American numismatics, there is no shortage of fascinating history behind the creations of the US Mint. There is, however, one particular coin that tells a story like no other coin ever produced: the Trade Dollar. The eccentricity of this coin is first noticed with the portrait of Lady Liberty displayed on the obverse. Seated on bales of merchandise and surrounded by wheat, Lady Liberty extends an olive branch of peace over the ocean. When viewed with the proper context, the peculiar design of the Trade Dollar shows immense purpose, as it is displayed on the only American coin produced with the express purpose of circulating in another country. In essence, Lady Liberty is poised to symbolize the opening of peaceful trade with oversea nations, particularly China and other countries in East Asia.

The countries of East Asia had long shared an affinity for silver coinage, although their preference was the silver 8 Real produced in Mexico. The reasoning behind this preference was twofold. For one, the Reales were a half-gram heavier than the silver dollars produced in the United States at the time. Additionally, these 8 Reales had showcased the same design from 1824 to 1865, meaning the coins were more well-established and reliable than American silver coinage at the time. During this period of time, when the United States needed to trade with China, coinage needed to be converted into Mexican silver otherwise it would not be accepted. In the end, the cost of this process was a major burden on the American government.

In 1866, however, the design of the Real was changed, and the Mexican government introduced a new coin to honor the reign of Emperor Maximilian. Knowing that the Chinese government was weary of new coin designs, the United States felt that it was an opportune moment to implement a new silver dollar that could become the standard of trade with China. The first step to producing this coin was taken in 1872 by

Initially, this silver dollar was to be called the “Silver Union,” as to not be mistaken for other circulating coins of the time, but this name was shortly changed to the “Trade Dollar.” Struck from 27 grams, this 90% silver dollar was made official with the signing of the Coinage Act of 1873. Designed by William Barber, the production of Trade Dollars came in both circulation and proof strikes. Circulation mintages lasted only from 1873 to 1878, as the Trade Dollar’s precious metal value had dropped to around 80 cents. On February 22, 1878, Secretary of Treasury John Sherman officially discontinued production of circulating examples.

Many of the circulation Trade Dollars that were sent to China display chop marks. The term “chop mark” refers to Chinese characters that were stamped into coins by merchants in order to certify their weight, value, and purity. While most Trade Dollars circulating through China displayed chop marks, the size, appearance, and quantity of marks per coin could range greatly. Oftentimes, as these coins switched hands from merchant to merchant, more and more chop marks would be made into the coin’s surface.

Proof Trade Dollars, on the other hand, were officially produced until 1883 to match the demand for silver proof sets by American collectors. The lowest mintage of 510 examples occurred in 1877, while the highest mintage of 1,987 coins occurred in 1880. A small handful of proof Trade Dollars were issued in 1884 and 1885, however, these examples have no mint records and are thought to have been produced secretly by an employee.

Although the Trade Dollar was not well-received during its release or celebrated by numismatists even decades after its debut, these unique coins and their tremendous history have become popular in more recent years. Now collectors across the country seek Trade Dollars to add to their numismatic collections, whether they are finest known proof examples or chop marked circulating examples. The legacy of this intriguing coin series continues to grow as time passes and with it, their numismatic value steadily increases.