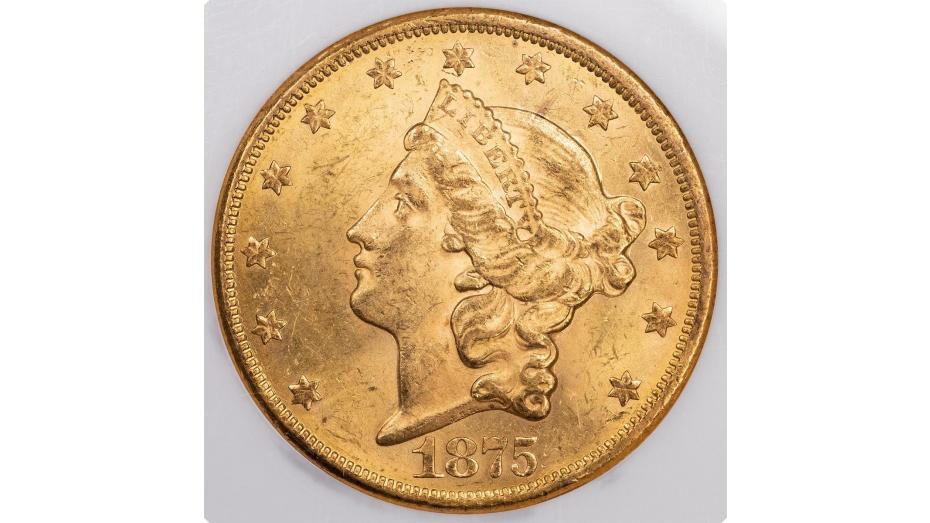 Of all the Liberty Head Gold Double Eagles struck by the United States Mint, those produced at Carson City have gained a reputation among collectors as the finest examples for their immense rarity. In total, only about 850,000 Carson City Liberty Head Double Eagles were struck across nineteen issues. To put that into perspective, many Philadelphia and San Francisco mint issues dwarf that mintage number in just a single year of production.

Given the scarcity of Carson City gold, only 111,151 1875-CC Liberty Head Gold Double Eagles were minted. Finding one of these treasures in any condition is difficult to do, but finding one in Mint State condition is nothing short of a miracle. In total, only 1,028 examples have survived to date in Mint State—less than 1% of the total mintage. This specific 1875-CC Liberty Head Double Eagle is graded in Mint State 63 condition and is one of only 56 examples in that grade, making it among the finest known for the issue. Only three finer known examples exist, the absolute finest being only one grade higher in Mint State 64.

Even the Smithsonian Institution, home of the largest U.S. coin collection in the world, has difficulty locating Carson City gold coins in Mint State condition. As a testament to that fact, their 1875-CC Gold Double Eagle example is in About Uncirculated 53 condition.

Yet another unique trait about this 1875-CC Double Eagle is that it is of the Type 2 variety. In total, three reverse designs were used on the Liberty Head Double Eagle, and the second design is easily the rarest. This reverse introduced the official motto of the United States, “In God We Trust,” to the coin and was used from 1866 until again being modified in 1877.

Between its scarcity as a Carson City gold coin, its incredibly high grade and its Type 2 pedigree, this 1875-CC Liberty Head Double Eagle is a truly impressive specimen. Coins of this caliber seldom come to the market, and it is always a pleasure to showcase such a unique piece of numismatic history.