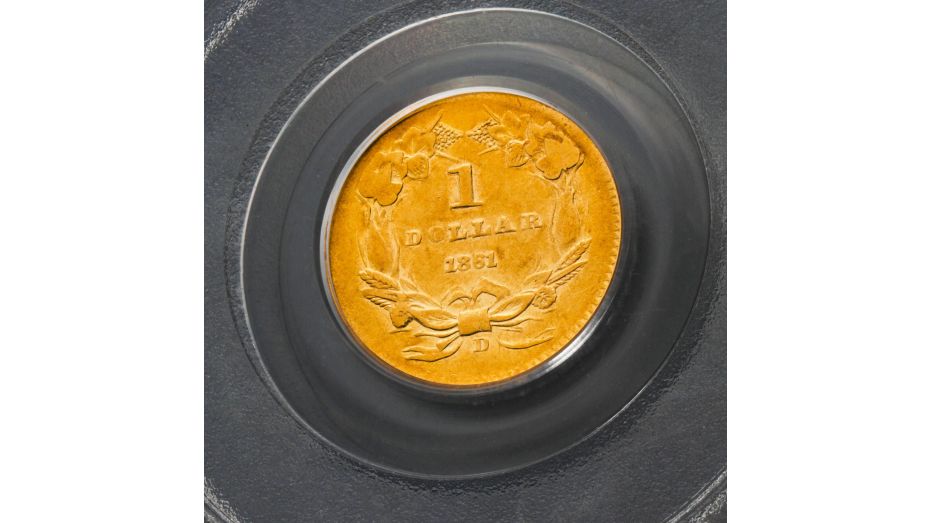 We often hear stories of homes being haunted by past residents, trinkets in curiosity shops holding the souls of their previous owners, and spirits lingering around tombstones where their bodies now lie. Often, these phenomena are condemned to movies and folklore, but very rarely does one of these occurrences take place in the realm of flesh and blood. There is, however, a coin that has haunted numismatics since the onset of the Civil War: the infamous “Ghost Coin” of the Dahlonega Mint in Georgia.

This strange moniker, however, doesn’t come from a literal haunting brought on by a ghost. Instead, the name comes from a lack of mint records acknowledging the production of the coin as well as a residual connection to the fallen Confederate States of America.

The coin we are talking about is none other than the 1861-D Gold Dollar, a coin whose story is completely unique. Its origins begin with Georgia’s seceding from the United States around the time of the Civil War’s beginning in 1861. With Georgia leaving the Union, the Dahlonega Mint, its gold, and all its equipment were free for the Confederacy to use as it pleased.

With only a small amount of gold available at the Dahlonega Mint, the Confederacy was able to produce approximately $3,000 worth of gold coinage. The denominations they struck were $5 Half Eagles and Gold Dollars.

Since the production of the 1861-D Gold Dollar was done exclusively by the Confederacy and its inexperienced minters, the quality of the coin is lacking. Most of the legend “UNITED STATES OF AMERICA” is incredibly weakly struck, especially the words “UNITED” and “AMERICA.” The reverse of this coin follows that same trend with the wreath and the denomination being very difficult to make out.

Despite what many may think, it is not due to wear that the details of these coins are weak. In fact, even the highest graded coins in Gem Mint State condition show these same flaws. With that in mind, it is certain that the weakness of the strike was brought on by how the dies were produced and treated by novice Confederate mint employees

With no official mint records as evidence, the 1861-D Gold Dollar’s mintage is only able to be estimated. The numbers range from between 500 and 1,000 coins produced, although it is said that only 65 to 75 of the coins still exist today.

Due to the massive demand for the 1861-D Gold Dollar, it almost never hits the open market in any condition at all. A little over a dozen examples have traded in the past decade. Two specimens have traded in the last two years, a PCGS XF45 that brought nearly $55,000, and a PCGS AU55 that traded for approximately $75,000.

While the tale of the 1861-D Gold Dollar is more of a historic deep dive than it is a literal ghost story, it does act as a reminder of our country’s most difficult times. With such historic roots, and so few examples extant, the 1861-D offers a unique look into our country’s past that only a handful of collectors are lucky enough to see. If you’d like to be lucky enough to see a rare gold coin such as this one, then call 1-800-778-0624 to talk to our Private Advisory Coin Team today.