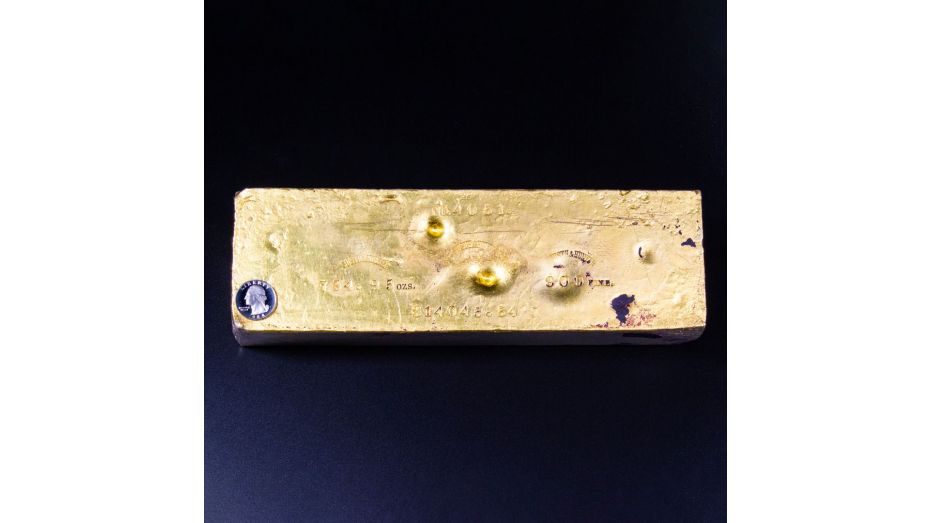 (Los Angeles, California) September 13, 2022 – A collector of California Gold Rush artifacts has paid more than $2 million for a historic 62-pound gold bar recovered from the 1857 sinking of the fabled “Ship of Gold,” the S.S. Central America.

The nearly foot-long ingot was nicknamed the “Carson Bar” after late-night television host Johnny Carson carefully picked it up during a 1991 segment of The Tonight Show Starring Johnny Carson, according to the seller of the massive gold bar, Rare Collectibles TV of Los Angeles, California (www.RareCollectiblesTV.com) through their Private Advisory Coin Team concierge service.

“The anonymous buyer is a collector who specializes in historically significant, rare United States coins with an emphasis on the California Gold Rush,” explained Jack McNamara, co-founder of Rare Collectibles TV.

“This enormous gold ingot is eleven inches long, three and a half inches wide, and a little over two inches high and is one the largest surviving gold bars of the Old West. It’s a national treasure that is one of America’s most important artifacts of the California Gold Rush,” McNamara stated.

Bob Evans, the chief scientist on the Central America discovery and recovery missions brought the huge gold bar to a May 10, 1991 on-air interview segment with Carson who was impressed by the retrieved sunken treasure and briefly lifted it.

“Because the ingot weighed over 50 pounds, two NBC-TV stagehands had to carry it onto the set, but during the unrehearsed segment on the air, Carson grabbed it by himself with both hands,” Evans recalled. “The King of Late-night wrestled with the King of Gold Bars. As he held the big piece of yellow metal, I watched as concern crossed Johnny’s face. Gold, mind you, is around 50% heavier than lead, which is usually regarded as something very heavy. Seated only five or six feet away, I saw Johnny’s body grow tense, and the veins bulge in his neck. This became a brief competition between man and mass.”

Discovered in 1988 on the seabed about 7,200 feet below the surface of the Atlantic Ocean off the coast of North Carolina, the ingot was made during the Gold Rush by prominent San Francisco assayers Justh & Hunter. It weighs 754.95 troy ounces (a little over 62 troy pounds) and was valued at the time of its creation a century-and-a-half ago at $14,045.54.

“The S.S. Central America was carrying about 30,000 pounds of gold bars and gold coins when it sank in a hurricane in September 1857 on a voyage to New York City. The loss of the gold was detrimental to the U.S. economy and one of the factors that led to the financial Panic of 1857,” McNamara explained.

Rare Collectibles TV was founded in 2014 by numismatic experts and lifelong coin collectors Jack McNamara and Rick Tomaska. The company’s mission is to collaborate with collectors to curate their personal dream numismatic collection with the most eye-appealing coins available. Jack and Rick believe in the historical value of a coin and approach every numismatic collection as a learning experience. Through Jack and Rick’s Private Advisory Coin Team, coin specialists offer customers as much significant information about that coin’s background and story as possible. Every collection weaves a unique story and RCTV is dedicated to educating collectors with regard to the history and stories that coins tell. 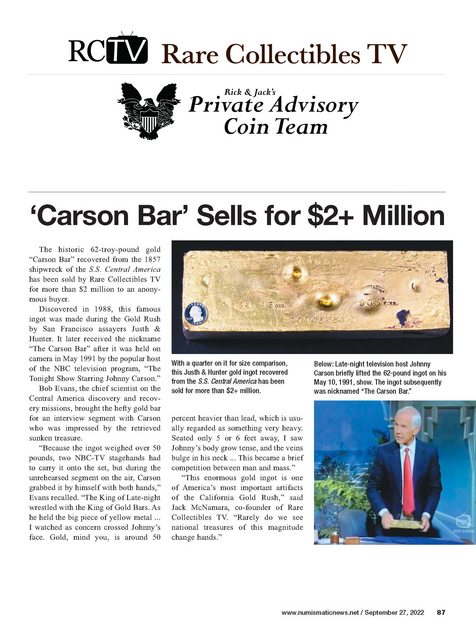