The Coin Guys Meet Frankenstein: The Monster Errors of Numismatics 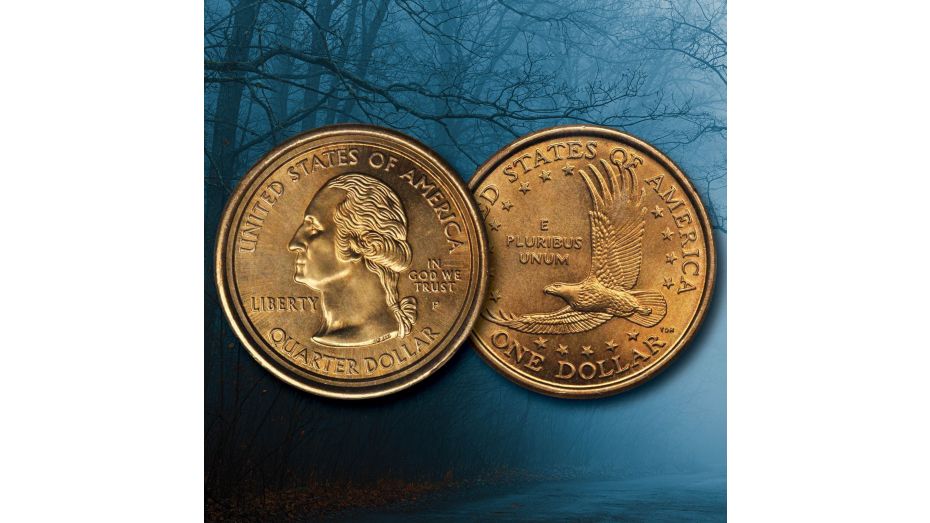 The Coin Guys Meet Frankenstein: The Monster Errors of Numismatics

The Monster Has Been Let Loose

We have all heard the story of Doctor Frankenstein, a scientist whose obsession with creating life leads to the birth of a monster constructed from the remains of deceased humans. Written in 1818, the story of Frankenstein is one that is almost as old as American numismatics itself. And although there has never been a numismatist to bring an inanimate object back to life, there certainly have been a few that have created monstrosities of their own. Here are a small handful of errors coins depicting designs you wouldn’t expect to find together. These are the Frankenstein’s Monsters of numismatics.

The first coin on our list is also the most famous, even being featured as the number 1 coin in the book 100 Greatest US Error Coins by Nicholas P. Brown, David J. Camire, and Fred Weinberg. Known as the 2000-P Sacagawea Dollar Mule, this Sacagawea Dollar is like nothing you’ve ever seen—and that’s because there is no image of Sacagawea on it all! Instead, this unique coin displays the Obverse of a Washington Quarter and the Reverse of a Sacagawea Dollar.

The leading theory as to how this coin was created goes as such: A mint employee requested a new die for the Sacagawea Dollar after the current one was overused. Since the Sacagawea Dollar and Washington Quarter are nearly the same size, a Washington Quarter die was mistakenly given to the employee. That employee then went on to install the die into the coin press without double-checking its design. The result was our first Frankenstein coin: the 2000-P Sacagawea Dollar Mule, a coin of which only 13 are known to exist!

Ringmasters have long touted an impressive range of uncanny acts at their circuses. Among the most striking of these acts is the two-headed animal. Whether it’s a calf or a snake, we have all become familiar with this acclaimed circus trope. But have you ever heard of a double-tailed animal?

Of course, since the reverse of the Washington Quarter doesn’t display a date, it takes a bit of detective work to figure out when they were made. According to experts, based on the group of coins this error was found with, it is likely that these errors were struck at the San Francisco Mint in 1965. As to how it happened, it’s still inconclusive. Some say it was a legitimate error while others suggest it was struck clandestinely by an unscrupulous mint employee. Either way, this Double-Tailed Washington Quarter is a numismatic rarity, a tremendous oddity, and the second coin on our list of numismatic Frankenstein’s Monsters.

Our final coin on the list is the most diabolical, as the Doctor Frankenstein that produced it was almost certainly seeking chaos. What originally started out as tin token from a Shell Gas Station in Missouri, eventually found its way to becoming a 1970-S Kennedy Half Dollar. How did this Shell token manage to transform? Well, it wasn’t done by magic, and it certainly isn’t a Halloween costume.

The leading theory of how this error coin was created is through a rogue Mint employee who mischievously tossed a shell token into a bin of Half Dollar planchets. As there would be no way for this employee to reclaim the coin, it was certainly done as a way to create pandemonium.

Throughout American numismatics, there have been numerous oddities created. Whether these coins were produced on purpose or by mistake, it’s all thanks to the Doctor Frankensteins of numismatics. It’s up to you to decide if these coins or monstrosities or just misunderstood. Many more unique error coins exist, so don’t worry if you can’t find any of the ones mentioned above! Make sure to check out Rare Collectibles TV’s favorite recent error coin today!