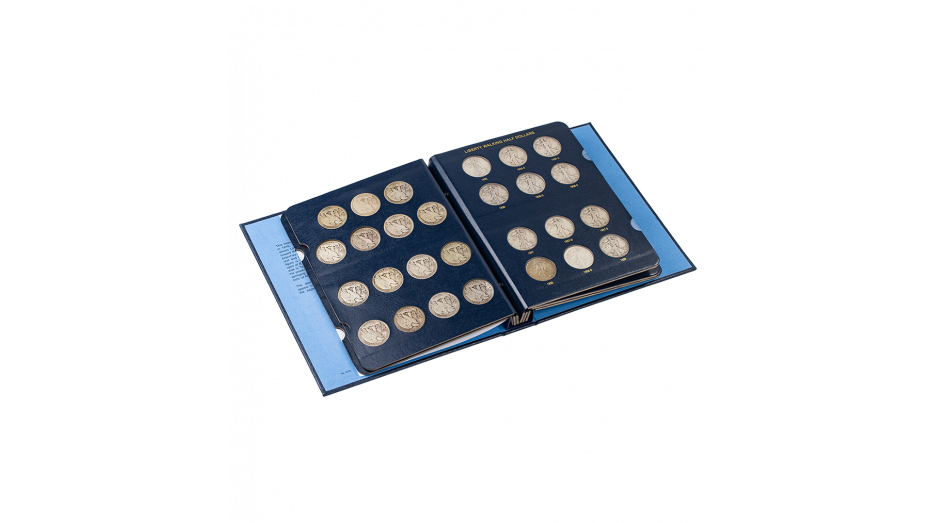 The Walking Liberty Half Dollar series, designed by Adolph A. Weinman, was minted from 1916 to 1947 and is considered one of the most beautiful designs in American numismatics.With a mintage that spanned World War I, the Great Depression, and World War II, the Walking Liberty design has become one of the most sentimental and nostalgic U.S. coin designs. This stunning design depicts Lady Liberty, wrapped in the stars and stripes of the American flag as she strides forward with an outstretched arm and an open palm, which beckons in the hopeful rising sun of a new day. Due to this coin’s mintage during these tumultuous times of American history, it has become a symbolic coin, indicative of America’s perseverance and ability to always succeed, even in the face of despair.

This 65 coin set contains every date and mintmark that the Walking Liberty Half Dollar was struck with, all between Good and Extremely Fine condition. As part of this set you will receive even the most difficult to come by key dates of the series. This includes the 1916-S (mintage of 508,000), the 1921 (mintage of 246,000,) the 1921-D (mintage of 208,000), the 1921-S (mintage of 548,000), and the 1938-D (mintage of 491,600). Out of all half dollar series produced by the United States, the Walking Liberty series is known to have the lowest mintage dates, making it an incredibly difficult set to complete. Don’t miss out on your chance to add this full set of stunning Walking Liberty Half Dollars to your numismatic collection for the low, low price of just $2,495!