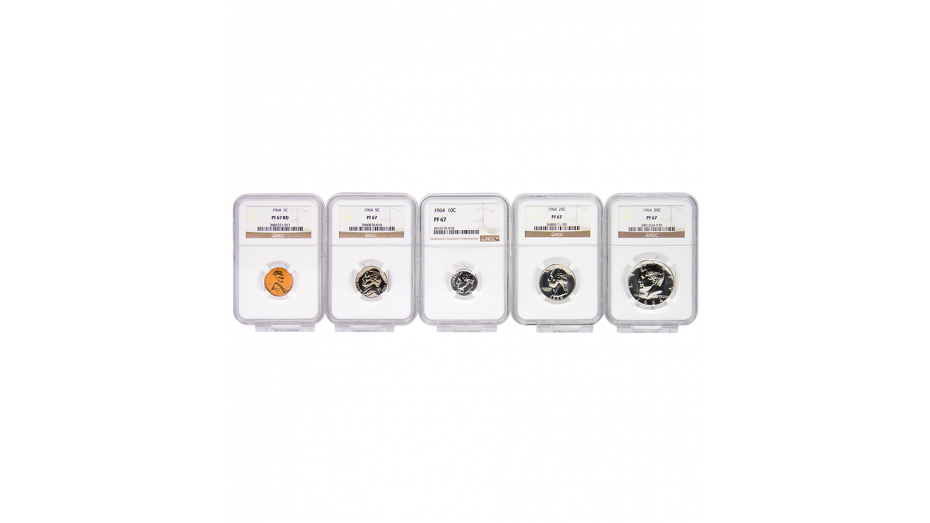 
The United States Mint began striking Proof Sets in 1936. Before this time, Proof coins needed to be ordered individually from the U.S. Mint. With the advent of the Proof Set, collectors were able to order one set that contained Proof examples of all circulating coins of the time. Today we have the 1964 Proof set graded a Superb Gem Uncirculated Proof 67. 1964 marks a monumental year for the Proof Set because it is the final year that the Philadelphia Mint struck Proof coinage.

Starting in the early 1800s, the original United States Mint in Philadelphia was the first of the American Mint branches to produce Proof coins. Proof Coins were originally struck for only the most important individuals in a nation such as dignitaries, ambassadors, kings, and queens. Proof mintages are coins that represent the state of the art. They are the finest possible representation of coins that a mint is able to produce given the technology of the day. Proof examples are made specifically for collectors in limited quantities. They are struck from polished planchets and struck using dies that are re-polished every few hundred impressions. This process guarantees a stunning, lustrous coin every time. Each Proof coin is then struck 2 or 3 times under high pressure to ensure a beautiful, full strike. These coins are then individually handled and packaged immediately to avoid abrasions.

The Year Set that we are offering today was produced in 1964. That is the final year that the Philadelphia Mint was in charge of minting Proof Set coinage. Due to poor packaging and quality control at the time, many Proof coins of the 50s and 60s have succumb to unpleasant toning, spotting, and hazing. Only a limited amount of these coins have emerged from their Proof Sets in lustrous, high quality Proof 67 condition. Today you can order this stunning 1964 Proof Set for the low, low price of just $169!