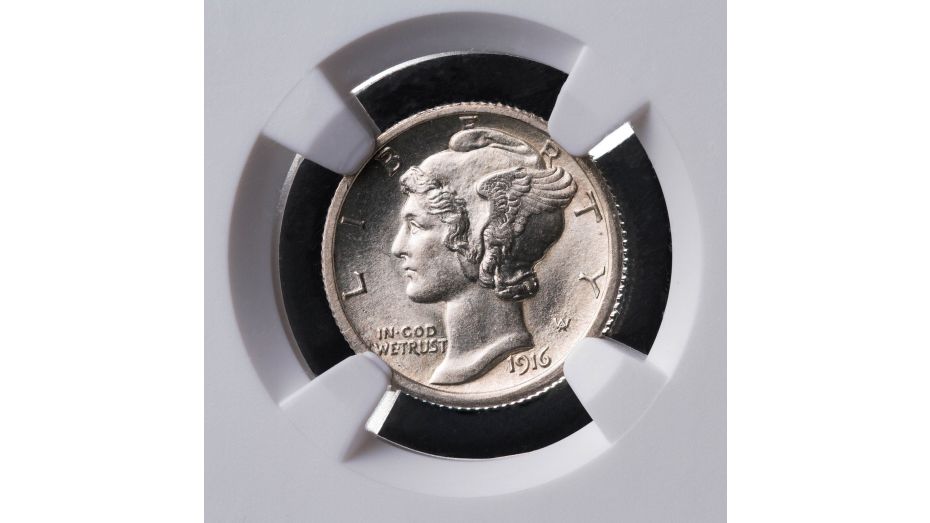 The Winged Liberty Head Dime, more commonly known as the Mercury Dime, has many controversies around its design. For one, the obverse is meant to depict Lady Liberty, not the Roman God of Travel Mercury, despite the winged cap they have in common. The second and more mysterious controversy is whether the model for Liberty was the American Venus herself, Audrey Munson, or the wife of a Pulitzer Prize winning poet.

Born in 1886, Elsie Viola Kachel lived a simple life in Reading, Pennsylvania. In 1904, she met poet Wallace Stevens and, after several years of courtship, were married. Stevens’ family did not approve of Elsie, citing her as too low class for their Harvard educated son. Reportedly, his family did not attend the wedding and he did not speak to them for many years.

A few years after they were married, the Stevens family moved to New York City. There they rented an apartment from famous American sculptor Adolph A. Weinman. In 1913, Weinman convinced Elsie Stevens to sit as a model for a bust. One of the most trivial qualities, her pinned up hair, would later be used to put together that it was likely this bust that appeared on the coin.

In 1916, both the Mercury Dime and Walking Liberty Half Dollar were released by the US Mint. These two designs came from the acclaimed artist Adolph A. Weinman after contests were held to bring new designs to American coinage. While Audrey Munson very publicly claimed to be the woman on the Walking Liberty Half Dollar, she never claimed to be the face on the dime. Considering how much acclaim Munson gained from being the model for the Walking Liberty, the fact that she never claimed to be the woman on the dime is a point in Elsie Stevens’ favor. In fact, the local newspaper publication Reading Eagle out of Pennsylvania claimed that Elsie Stevens was the Liberty depicted on the Mercury Dime.

“Local people are greatly interested in the [Mercury Dime] reported to bear the profile of Mrs. Wallace Stevens of Reading,” was what the Reading Eagle printed in their January 17, 1917 issue. Despite this claim, Elsie Stevens did not invite fame into her life as Munson did. And while her daughter Holly Stevens did indicate in later interviews that her mother was the inspiration, Adolph Weinman’s son contends that Audrey Munson was the model for both coins.

The strongest piece of evidence that Elsie was the model for the Mercury Dime is the bust that Weinman created of her in 1913. The resemblance between the bust and the ten-cent piece is quite striking, which would mean that Elsie Stevens’ bust was the inspiration for the famed Mercury Dime.

While there is still debate between whether it was Audrey Munson or Elsie Stevens who modeled for the Mercury dime, one thing is certain, it is one of the most stunning coins to come from the Renaissance of American Coinage. Rare Collectibles TV offers a selection of some of the finest examples of Mercury Dimes and Walking Liberty Half Dollars.

The Tale of Josh Tatum and His 1883 Racketeer Nickel