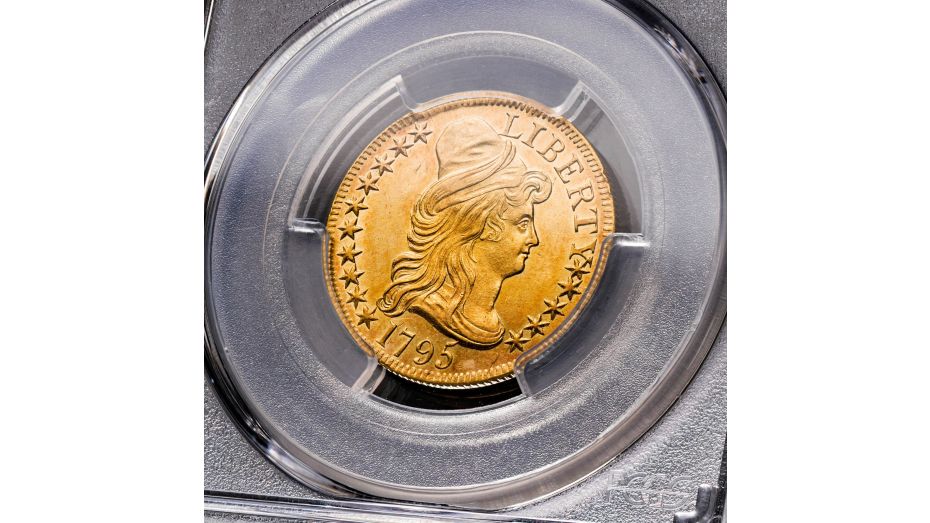 Before the United States had struck the world-renowned Saint-Gaudens and Liberty Head Gold coinage, America relied on gold coins struck in other countries such as the Spanish eight escudos. The idea of using foreign coinage in our new country did not sit well with our Founding Fathers as they believed that no country can be independent without its own monetary system. As a result, our first President George Washington signed the Coinage Act of 1792.

This Act set the dollar as the standard unit of money in the United States, established the United States Mint in Philadelphia, and regulated what designs would appear on U.S. coinage. Our gold coins specifically, were mandated to have a depiction of Lady Liberty on the obverse and an image of our valiant American Eagle on the reverse. From this simple act, our forefathers set into motion the beginning of our numismatic history.

It wasn’t until 1795, three years after the Coinage Act of 1792 was passed, that the first ever American gold coins were struck. The denomination that became the standard for gold coinage was the $10 Gold Eagle, with other denominations named based on the relative amount of gold they contained, such as the $5 Half Eagle and $2.50 Quarter Eagle. Early American gold coins dated from 1795 to 1834 contained 91.6% gold with the balance being composed of a mix copper and silver.

The first gold coins to be struck were the $10 Capped Bust Gold Eagle and the $5 Capped Bust Gold Half Eagle. Due to the primitive minting processes of the day, these stunning coins display a vast array of different varieties, making them two of the most interesting American gold series to collect.

Lady Liberty’s depiction on the obverse of these coins brought quite a bit of controversy since the cap that she wore was often mistaken for a turban among American citizens. The public generally disapproved of this rendition of Lady Liberty as they felt that it did not accurately represent the people of the country. The eagle on the reverse of these designs was also subject to criticism, oftentimes being considered too scrawny to portray the strength of our country. This design, known as the Small Eagle reverse, was only used from 1795 to 1797 before being replaced with a heroic Heraldic Eagle, which was based off of the Great Seal of the United States.

By 1804, the United States Mint was instructed to no longer produce $10 Gold Eagles at the request of 3rd U.S. President, Thomas Jefferson. This step was taken because Jefferson believed that these coins would eventually be melted down by bullion dealers across the country.

The $5 Gold Half Eagle and $2.50 Gold Quarter Eagle on the other hand, received redesigns in 1807 and 1808 respectively. This design is known as the Draped Bust and depicted Lady Liberty adorned by a Phrygian cap of freedom and a headband inscribed with the word “LIBERTY.” This Draped Bust design was slightly modified shortly after its creation and renamed as the Capped Head design. A final redesign, known as the Classic Head, was created in 1834 and was produced until the release of the renowned Liberty Head Gold Coinage.

All of these early American gold coin series are known to have incredibly low mintages due to the inefficient method of production and low quantities of gold ore available at the time. Between the limited quantity of coins produced and the few surviving example known to exist, early American gold coins are precious treasures that can rarely be acquired by private numismatists. Our Private Advisory Coin Team specializes in finding rare gold coins, just call 1-800-778-0624 to talk to them about your dream collection.

The Tale of Josh Tatum and His 1883 Racketeer Nickel